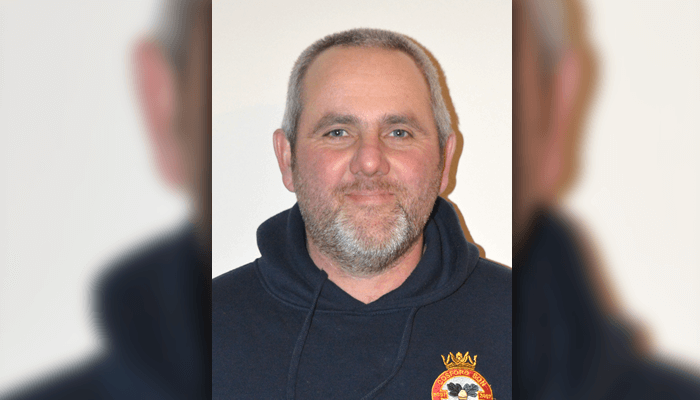 The squadron is run by a team of adult volunteers, but how much do you know about each of them?

“Just knowing what the cadets take away from the RAFAC and how they benefit later on in life is more than a valid reason to support the cadets as a volunteer.”Civilian Instructor Jason Pritchard

How would you describe your role? What are your usual duties?
At the moment I’m working on improving the band equipment, particularly the drums – taking them to pieces, fixing, adjusting and spraying them to ensure they’re kept in the best condition possible for band practices and future parades. Recently, I’ve also been training in order to become a shooting instructor which would enable me to take cadets out on a weekend for shooting lessons, which I’m really looking forward to in the near future as shooting is an interest of mine out of the Air Cadets. In addition to current projects, as a Civilian Instructor (CI) I’m responsible for ensuring the cadets’ welfare is maintained by supporting the cadets from a staff member’s position.

What is your occupation outside of cadets?
I work as a maintenance man, fixing different issues within a building whilst ensuring houses are kept in good condition; such as replacing broken fixtures and painting.

How did you find out about the RAF Air Cadets?
I found out about the RAFAC through my two daughters’ interests, Lucie and Molly, their involvement as cadets inspired me to sign up as a volunteer staff member and become a part of the organisation myself.

Did you do any work inside the RAF Air Cadets before becoming a part of our squadron?
No, this is my first role within the RAFAC.

Why did you choose to take on the role of CI at our squadron?
I joined to have the opportunity to teach cadets and take them out on shooting activities.

What are the main challenges of being a CI? What have been your largest hurdles you’ve had to overcome?
Adapting to how the RAF Air Cadets runs has been the largest challenge for me. As I wasn’t a part of the RAFAC beforehand, I had no previous experience or knowledge, so it took a while to adjust and fit in with the surrounding environment. During the first couple of months, I found that the organisation is quite structured with many procedures and regulations to follow which was quite overwhelming, to begin with, but it has come with time.

What do you gain from volunteering as a staff member? What are the reasons that make you want to volunteer for us?
Satisfaction, I gain a lot of pride from being a part of the organisation. I’m proud of the cadets, even the small things such as at the Christmas party. Watching all the cadets listening to the training video and respecting the staff compared to the rest of the public made me proud of the cadets and to be a CI at our squadron. I’m very privileged to be in this position, just knowing what the cadets take away from the RAFAC and how they benefit later on in life is more than a valid reason to support the cadets as a volunteer.

What have been your highlights and best experiences you’ve had whilst being a CI?
Staffing the Bridgnorth Walk last year was one of my happiest moments, especially seeing the cadets’ commitment and how much they enjoyed the walk.

What would you like cadets to do for you?
Nothing, it’s about what I can do for them.

Are there any further plans or aims you wish to achieve?
The main ambition is to become a range officer and be able to teach shooting and fieldcraft in the near future, which I’m certainly looking forward to.