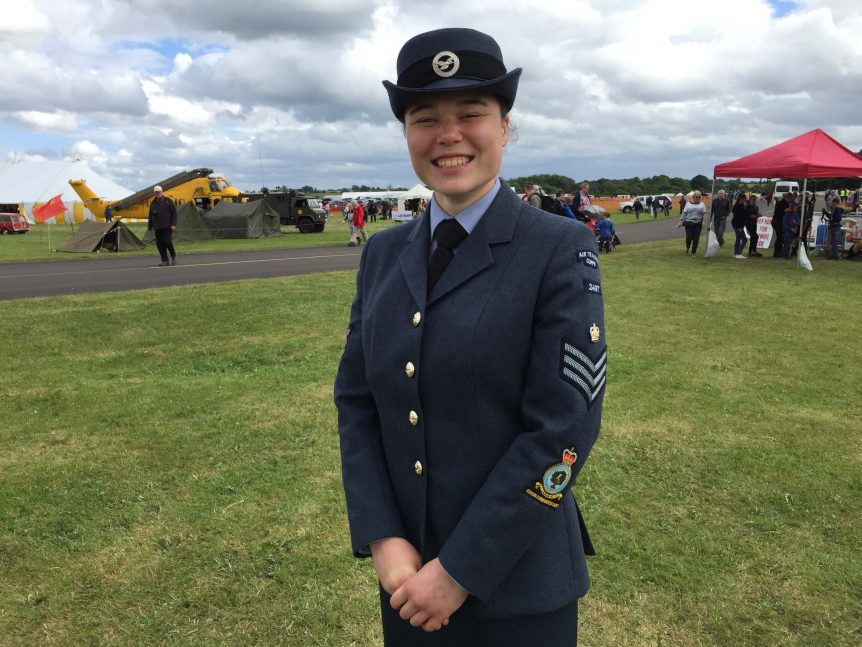 It all began with a police escort from the Officers’ Mess to the VIP tent on the crowd line – so you could see the display very clearly!

During the day, I had the opportunity to meet Air Chief Marshal Sir Stephen Hillier KCB CBE DFC ADC MA RAF, Chief of the Air Staff; Air Marshal Julian Young CB OBE BSc MA MSc MDA CEng FIET FRAeS HonFAPM RAF, Air Member for Materiel and Chief of Materiel (Air) and many more interesting people. Here, I got to see a side of the RAF that I would have never seen such as being able to see and understand how the structure of the RAF works and the people in charge of each trade group.

Pleased to meet Stn Cdr's Cadet, Claire Weetall, at @cosfordairshow - her laudable ambition is to be an Engineer! pic.twitter.com/RIxayT9HfL

At about midday, we were all invited to sit down for a four course meal. As you can imagine, this was slightly better than an expensive burger. We had a starter consisting of pâte and very nice bread, the main course had a variety of meats and salad. And after watching the RAF Red Arrows display, we had a variety of desserts; lemon meringue, fruit tart and a salted caramel tart. The meal was then topped off with a cheese board.

The day then ended by travelling back to the Officers’ Mess for refreshments.

This was a very enjoyable day where I learned a lot about different trusts within the RAF, as well as how the RAF works and how it works in conjunction with the Army and Navy, as well as oversea Armed Forces.

View photos of the day